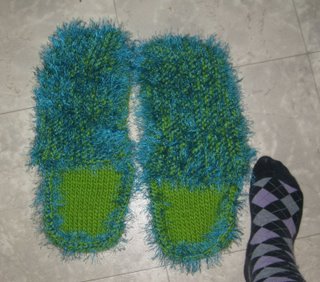 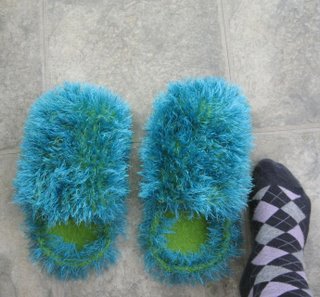 Parttern from Stitch & Bitch Nation
Yarn: Brown Sheep Lambs Pride Bulky in Limeade, Lion Brand Fun Fur in Turquoise
Changes: I grafted the top to the sole instead of using a three-needle bind-off.

These babies are huge. I felted them to within an inch of their life and they are still big on my size 9 feet. Right now they are perfect for stomping around the house saying things like "Jack not name, Jack job!". The size really isn't a problem since I, uh, never wear slippers. I love slippers in theory and the more absurd the better but I can't be bothered to actually wear them. I was all set to make a joke about my toes being naturists. I went to wikipedia to make sure I was using the right word and realized I couldn't come up with anything funnier than this nugget from their Naturism page - Canuding is the act of canoeing in the nude (work warning: boobies). How can I possibly think of a toe joke when all my brain wants to do is come up with a canuding based toungue twister? Hmmm, how about the Canuding Canuck canned the cannoli scarfing canary?
Posted by JessZ at 6:17 PM 1 comment:

Do these slippers make my tentacles look fat? 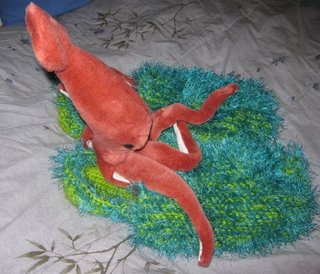 And the award for dopiest color names goes to Artful Yarns* for their Reality line. 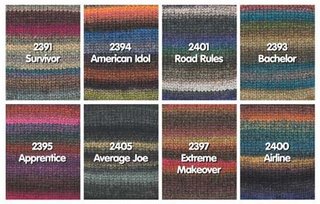 The "Extreme Makeover" colorway actually looks like a giant bruise which is pretty funny. If the rest of the colors mimicked the shows so well I'd be impressed, too bad it's obviously just a gimmick. I guess now that the popularity of novelty yarns is waning yarn companies need to look for new ways to make themselves look foolish. Did I say something was going out of style? That can only mean one thing! Yup, I'm knitting with it. When I cataloged the stash I realized that I picked out the wool and fun fur to make the fuzzy slippers from Stitch & Bitch Nation ages ago. I'm glad I didn't try to make them back then. The instructions in S&B Nation read like they were written by committee. Once translated they are a quick knit and I should be rocking the muppetskin shoes by the end of the weekend. As long as I'm on the subject of novelty yarns how about some "Natural Novelty Yarns". This is Spincycle Yarns' The Mariners Revenge Natural Novelty Yarn 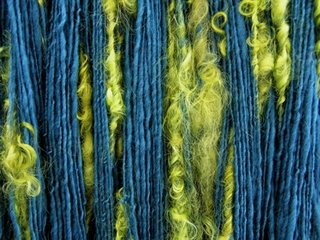 I think I love it but I'm pretty sure that if it wasn't in one of my absolute favorite color combos I'd be making a rather tacky joke about someone standing too close to the spinning wheel. They have some really pretty yarns (and the best knitting tattoos I've seen). Has anyone used their yarn? I've only seen one mention in the blogs I read regularly and it wasn't a perfect experience.


*Speaking of dopey those twits haven't updated their website since their Fall '05 lines.
Posted by JessZ at 9:02 AM 2 comments:

I think I'm going through Rhinebeck withdrawal. Maybe I should play an episode of Lime & Violet or Cast-On and sniff my new yarn. In the meantime I'll just have to try to remember it all and share it with you. We arrived before 10am and left just a few minutes before 5pm. It didn't even feel as though the entire day had gone by (well, except for the achy back, aggravated blister and empty wallet). Almost instantly I started recognizing people from their blogs which is beyond weird. Nothing makes you feel like a freshman faster than being surrounded by people you "know" who all seem to know each other but don't even know you're alive. If only I commented more! If only I posted on the Knitty boards more! I could be one of them! The blogger/Knitty meet-up was downright scary. From a distance they generated a noise like a hive of sorority girls turned up to 11. (You know I'm just jealous). It wasn't just the people I recognized, I knew the names of their clothes too (how perverted does that sound?). There were at least three Klaralunds, even more Rogues and who knows how many Clapotis. The festival itself lived up to everything I had heard. To keep it short beautiful yarn was everywhere and the number of booths selling things I could get elsewhere or crap were minimal. Here's what followed me home; 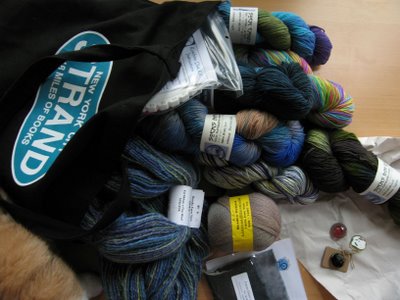 By far the craziest thing I bought was the skein of laceweight by Skaska Designs. See that little ball with the yellow band? That is 1,200 yards of yarn. I am so not ready to use it but the colors are just so me that I couldn't not buy it. (Trying to get an accurate picture of those colors on this dreary day is what made me sack my plans for more detailed photos of my haul.) There is also Sock Candy in Lapis and Socks that Rock in Blue Brick Wall, Lagoon & Spinel. Two gigantic (1/2 lb each!) skeins of Duet from Brooks Farm. Moving Mud has beautiful buttons. Hopefully I'll get a better pick of the three I bought up here soon. The pale silver/yellow and dark purple 100% silk yarn in the center of the pic and the rainbow* skein are from Ellen's 1/2 Pint. There is a distinct eau d' sheep to both of those skeins which makes me wonder where she stores them. Her yarn was lovely though and I wouldn't hesitate to buy more. My last purchase was the kumihimo kit and the freeze-dried indigo from Carolina Homespun.

Not everyone was as impressed with the show as I was. To quote Trek "MD S&W was much better" Did I say I was going through Rhinebeck withdrawal? What I meant was I can't wait for MD! It's just 6 mos & 10 days away!

Rhinebeck was fabulous. I was worried that it wouldn't live up to everything I heard and I was so wrong. I even managed to stop being so shy and said hi to a few bloggers including Cara (who was wearing her awesome kneehighs) the entire Squid family and Cari. I'll do a proper post with pics and coherent thoughts later. I need a moment to digest everything. In the meantime I'm going to head over to the shop and sign up for a spinning class so that I can justify buying one of those gorgeous Golding spindles next year.
Posted by JessZ at 8:48 AM No comments:

Soggy soapy bags and the skein of dooooooooom 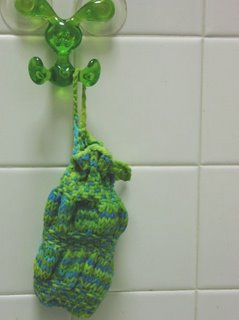 That is my soggy FO. It is a bag for a bar of soap. I'd link to the pattern but you really don't want to make this. Dv used it this morning and it is still soaking wet 15 hours later. Probably moldy now. But who cares because I used more of the Skein of Doom. This baby is one pound of Sugar N' Cream. I've also made an entrelac washcloth and the disdressed version of the string market bag and the thing can still take out a pig. 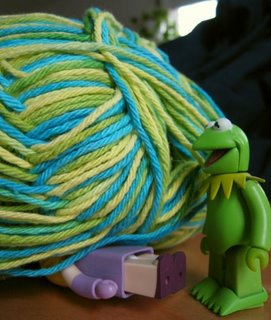 Use me before I kill again!

Do I have anything to wear to Rhinebeck? Nope, too busy making cotton housewares. The nice thing about working with all this cotton is all my other yarn feels soooo good.
Posted by JessZ at 10:25 PM 1 comment:

So much for temporary

When I set this blog up I thought it would just be a temporary step. Just someplace to get over my initial worries and play around until I came up with a better name and decided who I should let in on it. Two weeks later the name has grown on me (yeah, I couldn't come up with anything better) so I put my webmaster (ha! that's the only time I'm gonna call you master, babe!) to work and we bought drumroll please experimentsingreed.com . Whoo-hoo! I guess I better get my act together and start putting some effort into the posts and maybe let more than two people know about it. Oh and of course I'll make the place all pretty-like. Tomorrow I'll even have a FO.
Posted by JessZ at 8:29 PM 2 comments: 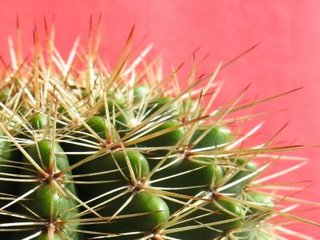 Herman is a grapefruit sized ball of pure fury or as Ted thinks of him "my new brush". Upon hearing that my two little troublemakers will even eat my moss (who eats moss!?!) Mom decided some protection was in order. Dv is sure the cats are going to horribly impale themselves on the thing. He has even expressed concern that they will put an eye out. He might be projecting just a wee bit. Herman drew blood within seconds of greeting Dv. Ted's meeting was a little different basically it was sniff, ouch, sniff, ouch, sniff, ouch,sniff, ouch, sniff, ouch, sniff, ouch and then he realized he could rub on it like a brush. I might need to protect Herman from Ted. Oh and the name? "You know what's funny about Herrman? There's nothing funny about Herrman". Dv suggested Hold Me Touch Me. Better joke but crappy movie. The musical was so good but the 2nd movie was PAINFUL so I'm sticking with Herman.
Posted by JessZ at 2:30 PM 1 comment:

You wanna put what where??

So I went out to the island to help m w bear's iv. Yeah, that went well. The needle was friggin' HUGE. I have drill bits smaller than it. Poor bear. There was saline everywhere. M's gonna need another lesson from the dr. But don't worry, bear was ok once we stopped poking and started feeding her.

It took me forevah but I finally finished entering all my yarn into a spreadsheet. I have far too much yarn to be wasting time on spreadsheets instead of knitting but I'm glad I did it. Maybe knowing how much yarn I actually have will help keep my spending in check at Rhinebeck. Emphasis on the maybe. The entire time I was working on it I had Skullcrusher Mountain stuck in my head. Go listen! It's like Barenaked Ladies meets The Venture Brothers.
Posted by JessZ at 10:21 AM 1 comment:

Don't say I didn't warn you

Whatever you do don't click this link before you go to sleep!
Posted by JessZ at 11:40 PM 1 comment:

I do not need. 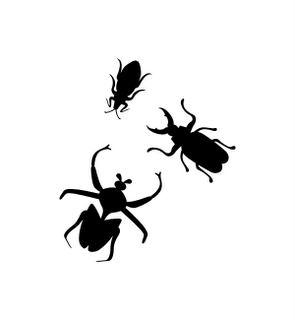 I do not need giant vinyl bug stickers. I def do not need them in silver. Nope. Nope. Nope. The fact that I am renting is the only thing keeping me from this sticker. Of course I'm deep in the throes of a chrysanthemum-motif obsession so maybe thats all it is. But I know I don't need the insects.
Posted by JessZ at 1:40 AM 1 comment:

Lookee what I got today 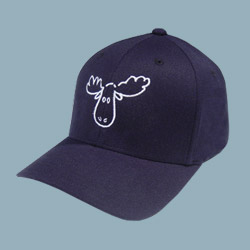 Compliments of the best husband ever®. Of course the universe wasn't too pleased with the idea of me owning it. After all this isn't just a Yankees cap but a Mike Mussina cap. So the heavens opened up and the game was delayed today until they can figure out how to punish me. I think I need to make an offering, but of what...
Posted by JessZ at 11:36 PM 1 comment:

I have a problem

I can't decide which ones I like better, the regular size - 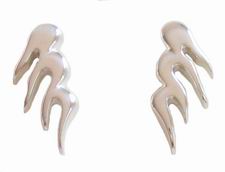 or the small size -

Choices, choices. Maybe someone will decide for me.

BTW I need to pick up some horrified b-movie victims so if anyone needs a bacon wallet or whatever just let me know.
Posted by JessZ at 11:54 PM 2 comments:

Paisley wants this too 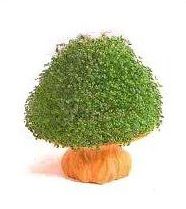 Frankly I can't believe I've lived this long and never had one. Obviously I want this one. Just look at the detail in the trunk! You can stop laughing at me now. How else am I supposed to grow this ancient wonder food?
Posted by JessZ at 3:16 AM 1 comment: