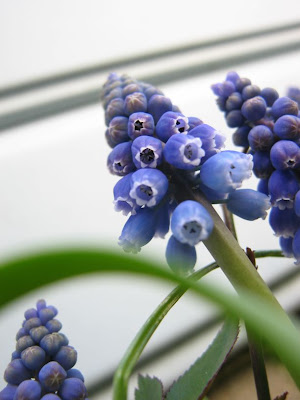 Snakes on a Train (too late?)

So, I'm at the 8th St stop waiting for the train and I see this guy who looks exactly like a tv character but I can't figure out who he reminds me of. He has the exact same hair and body type while his clothes and tattoos are pretty close. I can totally hear the character's Vally girl boy accent in my head but I. Just. Can't. Place. It. Just before bed I finally realized he's Snake!
Posted by JessZ at 6:16 PM 1 comment:

It's beginning to look like spring around here. Highways in New York are ablaze with forsythia and our parkways are flooding. Maybe that's why I'm so full of optimism and resolutions, especially green ones. At dinner last night, apropos of nothing, I told Dave that I'd like to try cloth diapering. Considering that we aren't even trying to get me pregnant (yet) you can imagine the look of bewilderment on his face. I quickly told him I didn't mean for me personally and we moved on. On a more imminent note I've resolved to bring the number of shopping bags I take home to zero. I always refuse bags when I can fit my purchase in my purse or tote bag but it isn't often enough. I have tons of canvas bags (I'm a sucker for a free-with-purchase tote) but they are too bulky to keep in my purse or pocket 24/7 so they only get used some of the time. My solution? Buy stuff! (Yeah, I know. One day at a time, OK?) I just ordered a few of these super-lightweight bags to keep in my purse and scatter amongst my family. I also bought one of these babies to try out. To my eye that last one looks like an armored paper bag. No one is gonna mess with my bananas!

Bonus link - A gorgeous bit of paper marbling. I would have named the pattern Lotus but that's just me.
Posted by JessZ at 12:01 AM 1 comment:

And on with the Random!

1. Imogen pattern from Perl Grey
Have you ever seen a cozier sweater? I'm ordering the pattern as soon as I decide if I want anything else from their selection of neat pewter buttons & jewelry. Angry monkey stick pin anyone? discovered via Knit Spot

2. Useful tip for users of Firefox - If you accidentally close a tab you can retrieve it by going to History and then "Recently Closed Tabs". You get back your tab with its history intact. Very neat. I only just discovered this so if everyone else knew it forever please just nod and smile. 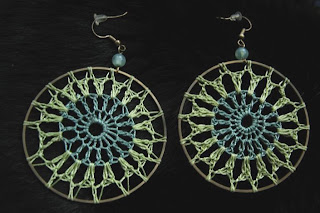 3. My damn earrings. I bought these for $7 while stocking up on tees at Old Navy. I can not believe the range (or number) of people that have come up to me while I was wearing them. Everyone from trendy blondes to middle-aged women to an old rocker (who was sporting the oddest mohawk/mullet combo) loved them. I can't take all the attention (or maybe it's because they look handmade and I didn't make them) so I'm sending them to live w my sister. 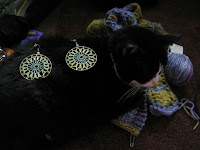 4. Cat Bordhi's Coriolis Sock Finally an episode of Knitty Gritty worth watching! I was beginning to think HGTV only showed the old episodes (I don't get DIY). The Coriolis sock looks easy and comfortable. It sort of wraps around the foot and I think this new construction will make for an extra comfortable sock. Now if only the publication date of her new book wasn't pushed back! I could have sworn New Pathways for Sock Knitters was coming out in May but the site now reads July/August.

5. The crack that is Socks that Rock (BTW they have some new colors up on their site). At Rhinebeck last year I left Dave on line at the Fold with a few skeins of STR. Ten minutes later he calls me away from the Brooks Farm booth so he can pick out some sock yarn. When I left he didn't want any. Did those evil women waiting with him on line convince him that he needed some? Did he just get caught up in the buying frenzy? All I know is now I have to knit a pair of size 12 socks for a man that refuses to wear short socks. I've been putting it off saying the one skein isn't enough and I need to get a coordinating one to do the toes, heels and cuffs. Maryland is two weeks away. My time is up. 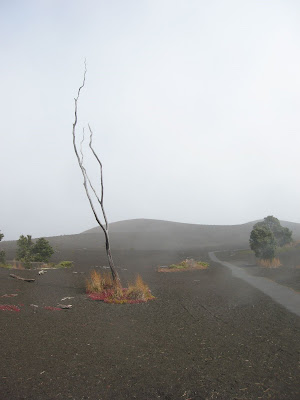 A drizzly morning on the Trail of Devastation
in Volcanoes National Park
Posted by JessZ at 12:01 AM 1 comment: 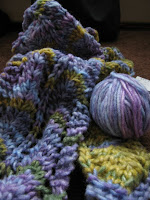 I'm sending my first* scarf off to be frogged and used in an afghan (along w the leftover yarn). I've never worn it. I suppose it's technically not even finished since I didn't break yarn after binding off. The bind-off didn't match the cast-on edge and I never bothered to research an alternative method since the yarn is pretty itchy. It was while knitting this scarf that I realized I knit combination style. I had no idea. Not that I've lead a sheltered knitting life or anything but the first time I saw someone knit in the English style I just thought they were left-handed. Anyway, the yarn should make a good afghan. Paisley certainly approves of its squishiness. 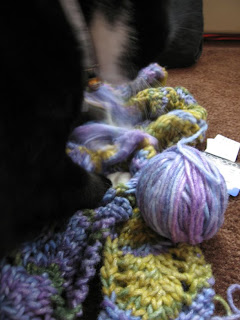 A close-up of the yarn, Air by Berroco, that shows off its nylon core. 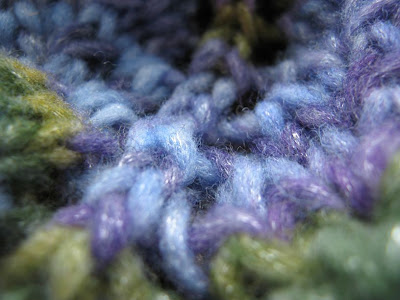 *That is to say my first since I started knitting again last year. I'm sure I must have knit one as a child.
Posted by JessZ at 9:16 PM 1 comment: 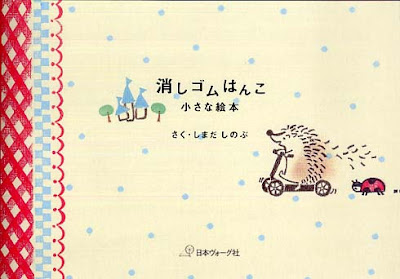 It's a book on carving your own stamps and creating labels and such with them. Here's a shoot from the inside 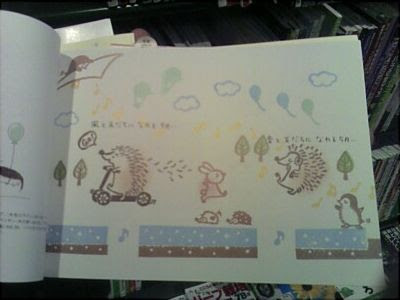 The rest of the book features other creatures like penguins and mermaids. I forgot to write down the ISBN. I felt so guilty about blogging a Japanese craft book without it that I started searching amazon.co.jp for it (why let a little thing like not understanding a bit of Japanese get in the way?). Amazingly I was able to find it in a few minutes. Whaa-la! ISBN 4529043398

I'm giving a bag of yarn the stink eye

I have a huge crush on Artyarns color #106. Some might call it an obsession. It started slow with a sample in my LYS and it wasn't long before I could spot a skein of it from across the room or in the crappiest of blog photos. Shades of lime to darker green, teals and a splash of brown-edged purple, whats not to love? You would think I have tons of it in my stash but I'm cheap and it's everywhere so I waited. I finally see it online for a nice price. 48 hours later it's in my grubby paws and I feel like I finally got to kiss a summer long crush only to find out he has bad breath. The purple edged with brown? Nowhere to be seen. Instead the yarn is dominated by kelly (shudder) green with some lime, a bit of olive, some sad looking teals and making a surprise appearance, navy. I've been disappointed by online purchases in the past but never by something I've seen in the flesh wool (multiple places!). I don't blame the retailer for this at all. I went back and checked the photo (you know, the one I ignored because I know what my beloved 106 looks like) and it looks exactly like what I got. humph
Posted by JessZ at 8:54 AM No comments: 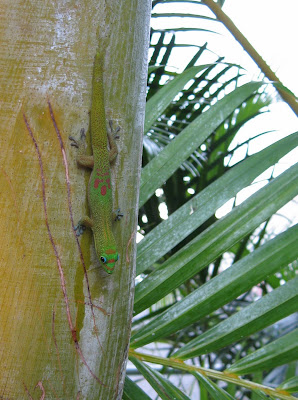 Needful yarns has a new yarn that is 95% viscose and 5% ceramic. It is anti-static, will shield you from UVA/UVB rays and lower your body temperature by 5 degrees. Probably makes a great dessert topping and floor wax too.
Posted by JessZ at 3:34 PM 1 comment:

I learned a few things in Hawai'i. 1 - Not even the Hawaiian sun will color my pasty calves (sadly not true for the rest of me). 2- The day you go to Ka Lae is not a good day to skip braiding your hair (windiest place I have ever been). 3- I really like palm trees, especially their bark (is bark the right word?). I took more than a few pictures featuring them and even more closeups of their many trunks than I care to admit. I wish I could have captured the sound of the wind rustling the palms at Pu'uhonau o Honaunau. I hate summer and I'm not too fond of the warm halves of spring and autumn but listening to those palms as the sun went down...yeah, I could move there. 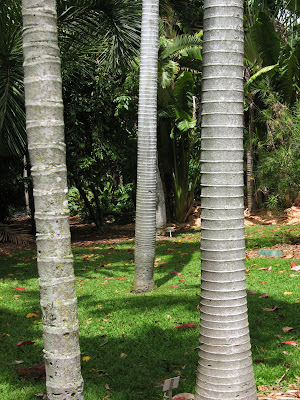 Three Palms at Foster Botanical Garden
Posted by JessZ at 12:42 AM

So here's what I spared you since my last wordy post. 1) Finally booked the flight to Hawai'i the husband and I have been talking about for ages. 2) The next day Teddy (seen here licking a pumpkin) had what the doctors called a stroke. It looked like the lower half of his body was trying to roll across the room while the rest of him tried to get away. This was on a Friday and we spent the rest of the weekend going to the emergency vet for an ECG, blood tests and an extended blood pressure test so that we could find out that he has an enlarged heart and a very bad heart murmur but otherwise he's perfect. Long story short he's on medication and is back to his old self and his prognosis is good except for the sudden death part. I wish I was kidding about that last bit. We asked the vet what we are probably looking at in the future and that's what he said. In between there was lots of waiting room knitting on my clapotis. Big mistake. For months afterward every time I looked at my knitting bag it was with dread since I was sure I was going to have to rip multiple rows because of knitting too tight and who knows how many mistakes. In the end it wasn't as bad as I imagined and my mom's motto of eh, good enough worked fine. I also spent a whole lotta time watching Ted in case he did something weird. That was kinda like staring at a stuffed animal in case it gets furry. Once things with Ted calmed down it was all Hawai'i all the time. Everyone around me must have been sick of hearing about the islands, even my husband who was going with me. In the interest of not driving the rest of you away I'll start wrapping this up. The sands pictured in the last post are (from top to bottom) Lanikai (super soft), Punalu'u (turtles!) and the olivine (AKA peridot) was from Pu'u Mahana. Here are two sea turtles snacking on seaweed at Punalu'u. 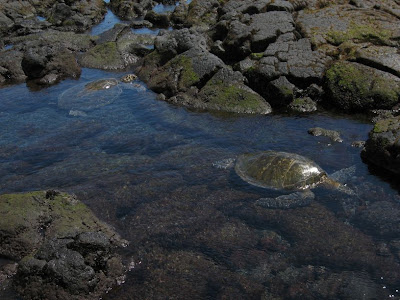